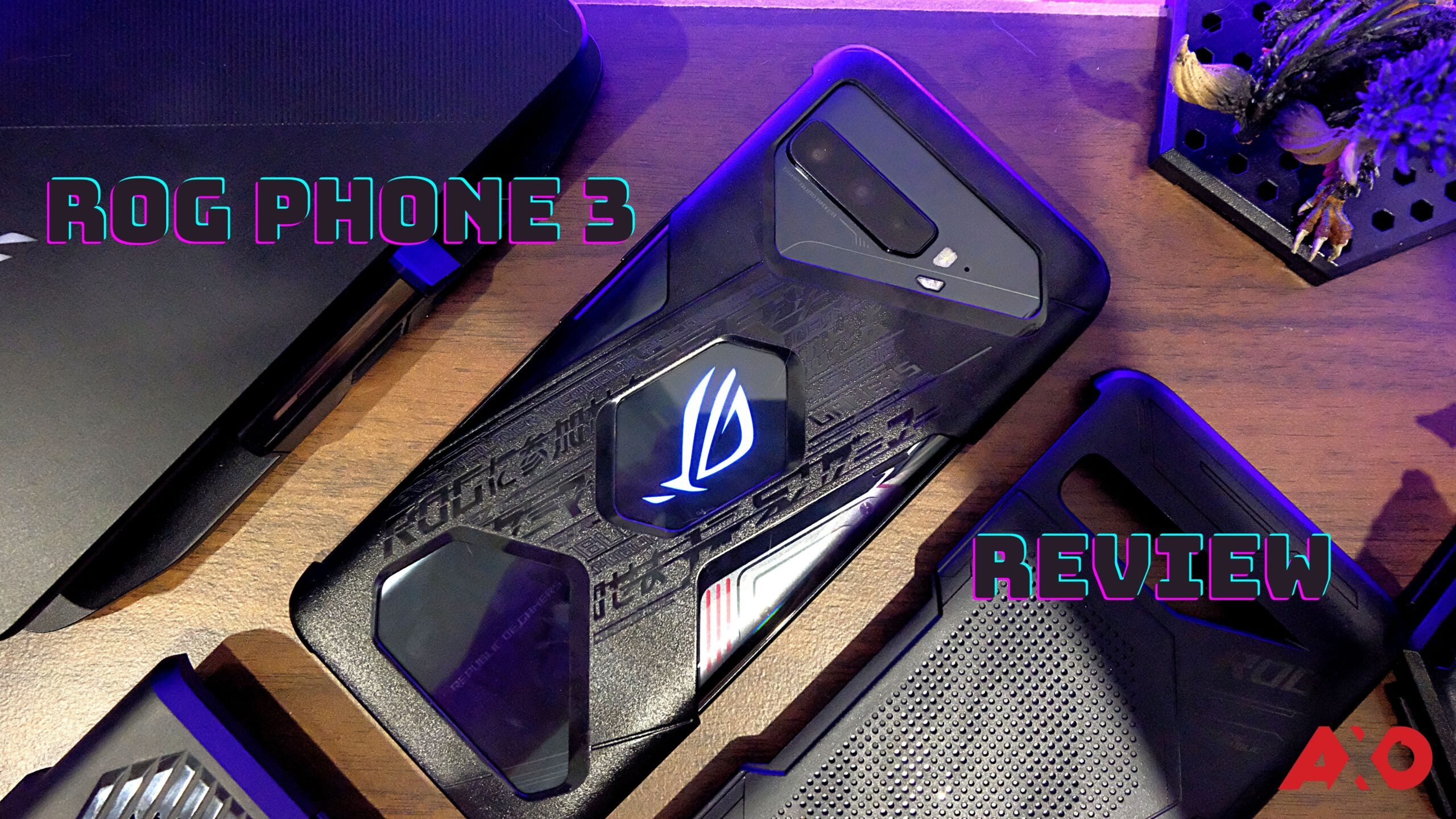 The Asus ROG Phone is definitely one of the most recognized gaming phones in the market. With the recent global launch of ROG Phone 3, we finally got to review the Malaysian variant that is soon to be available in the Malaysian market.

While picking up the phone, you would notice that it is heavier and bigger than your usual smartphone. Yet, it feels solid and has a quality hold to it with its glass back chassis.

The ROG Phone 3 looks less edgy compared to the precedent. Its heat-sink is now settled under a transparent glass design that reveals the copper grill of the back cover that dissipates heat through a small hole on the right of the glass. It gives off a bold and futuristic design while being sleeker and cleaner. While settling in the middle of the back chassis would be the RGB logo.

With all smartphones maximizing the screen to body ratio with a notched bezel, the ROG Phone 3 still has a full screen designed with a top and bottom bezel fitting both the front-facing speakers (top and bottom) and the sensors, front camera on the top bezel. Compare to a notch or punch hole design, we do prefer a full-screen display as it does not compromise game interfaces. Most AAA games are horizontal displayed, the left and right bezel give space to rest your thumb without accidentally swiping or unintentional touch during gaming.

The display packed in a market-leading 144hz refresh rate offers a more fluid experience while gaming and browsing through apps without delay to touch. The ROG Phone 3 manages to achieve a touch latency of only 25ms and a slide latency of 18ms; currently the world’s lowest latency among phones.

Apart from that, by placing the speakers on the bezel, it avoids disrupting sound quality while gaming landscape as your hand would not cover the speakers by holding it landscape. The speakers now have 7 magnets to give extra power and less distortion when playing audio. Vocal are clean and bass are deeper when it is played through the speakers

The ROG Phone 3 is packed with the 3.1 GHz high-frequency CPU in the speed-binned Qualcomm Snapdragon 865 Plus Mobile Platform accompanied by an overclocked Adreno 650 GPU and a 12GB of LPDDR5 RAM. The ROG Phone 3 can definitely keep up with everyday tasks from browsing to gaming. But what I did realize is that it gets a bit heated up when it runs games at the highest setting possible if you are using it bare. However, with the casing provided you, won’t feel any discomfort at all.

When it comes to battery life, the ROG Phone 3 packed in 6000mAh for all-day use. I’ve tried going around with it full charge from being fully charged on the afternoon the day before and I was able to end the day with around 9% battery left before I had to plug it in for a charge.

The phone also came with the bundled 30W charger that supports Quick Charge 4.0 and uses ASUS HYPERCHARGE Technology. It could be charged up to 75% in 45 mins. The downside on it would be that it is pretty hot for you to pick up after being hyper-charged. However, it cools down quickly after unplugging it from the charger.

I have been using the ROG Phone 2 for a while now, and when I first held the ROG Phone 3 I thought that it does not have much difference from the precedent. After a week with it, I realize that I was quite wrong about that.

The size and the weight of both phones stayed the same, from the front view, you can barely tell the difference between two phones which made me pick up the wrong phone quite a few times. While from the back, it is quite easy to differentiate due to the transparent glass over the copper grill at the back of ROG Phone 3 along with the hole that allows heat to dissipate from the phone. The phone now has 3 cameras instead of 2 and has a slightly thicker bump to it.

Along with that, I noticed that the ROG Phone now has an additional mic sitting right beside the camera flash. The sim card slot is now at the top left instead of the bottom left. Also, the ROG Phone 3 does not come with an audio jack port.

Difference In Performance And Features

While using the ROG Phone 3 for gaming, the most significant difference was the 144hz display which was a great upgrade from the ROG Phone 2. Although not many games support 144hz display, the display colors were noticeably brighter when displaying color tones, especially when viewing HDR contents. Apart from that, the fingerprint scanner is now slightly higher compare to the ROG Phone 2 which was a bit uncomfortable to unlock due to its weight, the height now feels just right with my grip.

When it comes to gaming, the AirTrigger 3 & Ultrasonic buttons are packed with more features now. Compared to the ROG Phone 2 where you can only tap/squeeze the air triggers, there are a lot more you can do with it. For example, the Ultrasonic buttons now also support swiping and dual partition button. Instead of having only two actions, you get to map 4 actions on the air trigger just like your typical PlayStation or gaming console. Not only that, the air trigger now supports Motion control where you can slide, swipe, and hold to do in-game actions which give gamers more room to customize and boost their gaming experience.

As for the speakers, I love the upgrade it got for the ROG Phone 3. Although it is noticeable that it is not as loud as the prior, the audio stability is much better as audio distortion when the volume is maxed out is quite noticeable on the ROG Phone 2. Vocals and bass are clearer with the speaker upgrade, gaming audio is less sharp and comfortable for ears as I game. Apart from that, the audio wizard now automatically detects ROG headsets, and fans who own them would benefit from advanced impulse and frequency response correction.

The AeroActive Cooler 3 accessory that comes with the phone had a slight upgrade too. The airflow is redesigned to sit around the area where the CPU and 5G are at instead of just the side for fingers comfortably while gaming. It is noticeably more silent compared to the 2nd Gen Aero Cooler. The 3rd gen Aero Active Cooler also includes a kickstand to act as a phone stand for watching videos or gameplay with a wireless controller. For the record, it is not backward compatible and vice versa.

Last but not least, we’ll look at the camera. I mean, the camera can be the last thing you look at when it comes to a gaming phone, but for a girl, I have my social needs alright. The ROG Phone 2 now supports 8K Video Quality, 64MP Photos, and Macro Shots. Instead of describing, I’ll let the sample videos and photos do the talk.

The ROG Phone 3 is said to be officially launching in Malaysia on the 5th of September 2020. While we do not have the price for the Malaysian variant yet, we were informed that it will be priced very closely to the previous ROG Phone 2 variants. However, there will not be 1TB storage option for the ROG Phone 3.

In this article:Review, ROG Phone 3, smartphone