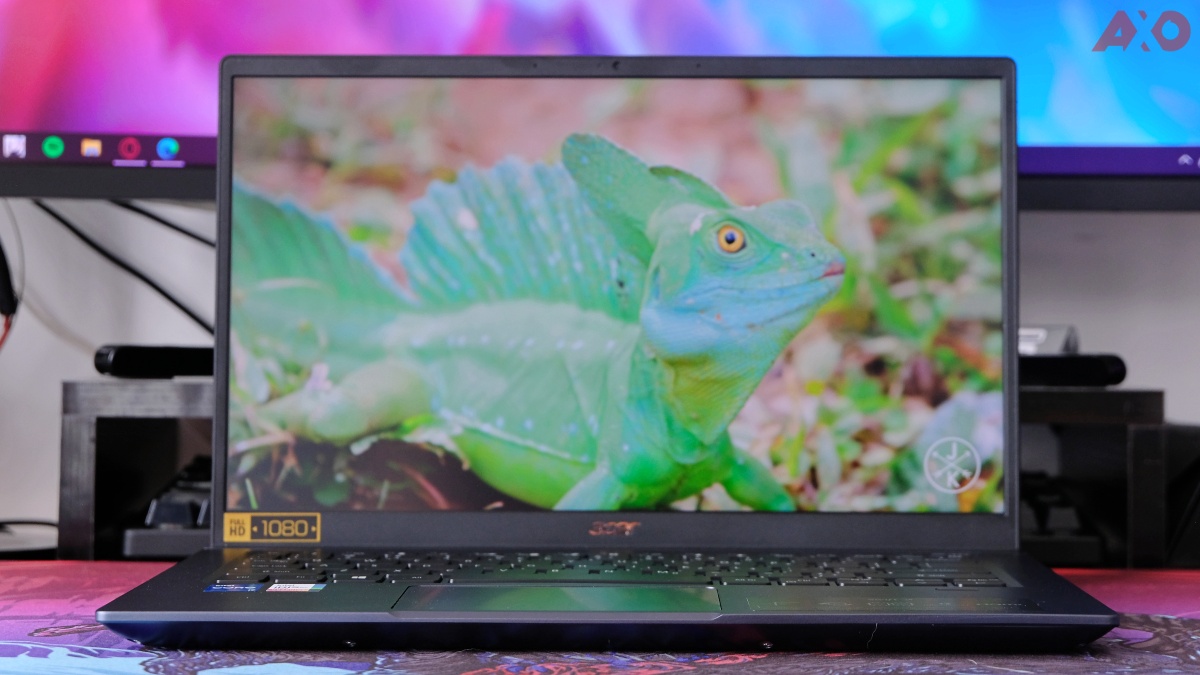 The Acer Swift 3X has a touch of elegance being made with aluminium. The entire laptop has great build quality, and a nice, reassuring heft to it. Weighing 1.37KG and measuring 17.9mm thin, the Swift 3X is still pretty thin and light for a 14-inch device.

So, how would you know it’s an 11th Gen with Iris Xe device? Just take a look at the rear, where the blue bar is on the hinge. When you open up the lid (you can’t open it up with one finger), the base is gently lifted up to allow for better ventilation and ergonomics when you type.

The Acer Swift 3X has a 14-inch FHD IPS panel, which can output a 1920 x 1080 resolution. The screen’s aspect ratio is 16:9 which makes it great for watching movies with, and it has comfortable viewing angles too.

However, the display does lean towards a colder colour temperature, but the colours shown are vivid, contrast ratio is great, and has the right amount of brightness even under direct sunlight. The fact that the display has a matte finish also makes it more comfortable to use on a daily basis, regardless of where you bring the laptop to.

Unfortunately, the Acer Swift 3X didn’t pass the single finger lift test, but it does have a groove to allow for easier two-finger opening. It’s just me nitpicking, and not a dealbreaker at all. The laptop isn’t the lightest and thinnest laptop in the market, but it’s one of the better ones for a 14-inch laptop.

The added functionality of a fingerprint sensor eases the login process, and the redesigned hinge makes the entire laptop more comfortable to use, not to mention keep it cool too.

The keyboard does have backlighting, so it’ll be great for those who like to (or have to) work in the dark. There is a slight flex on the center of the keyboard as well. The key travel is shorter than expected, but I liked that it had a “click” sound to it, and that they’ve made the right shift key extended. It certainly made typing on the laptop better, but I still cannot get past the fact that some of the keys are clumped up together, like the arrow cluster. The function row keys are also too narrow for my liking. You can get used to it, but you’ll eventually have misclicks here and there.

The trackpad on the Acer Swift 3X has the right size, and its glide is super comfortable to use. This is one of the laptops where I wouldn’t mind not using a mouse with. Apart from that, the tracking is good too, so no complaints there.

When creating content and doing heavy tasks like gaming, the laptop doesn’t get too warm either. Most of the heat is around the upper keyboard region where the ventilation is at. The left side of the trackpad does feel more warm the right side though.

With the laptop being capable of creating content, I would’ve like to see a full-sized SD card reader on the laptop. The laptop obviously has space for one more slot, but we’re not sure why Acer left it out because it would’ve been a big help to content creators out there, especially photographers and videographers.

The stereo speakers on the Acer Swift 3X are my least favourite part about the laptop. It serves its purpose to play audio, but that’s it. The speakers are relatively quiet, with decent highs and mids, and the lows are practically non-existent.

Performance wise, the Acer Swift 3X is equipped with the latest 11th gen Tiger Lake Core i7-1165G7 processor, paired with its discrete Iris Xe Max graphics. It also has 16GB of RAM onboard with 512GB of PCIe NVMe SSD storage.

For daily use, the laptop has no problem handling software and games. When you’re on the go using the laptop without a battery, it still performs fine too. When it comes to content creation and gaming, the graphics is able to keep up, albeit at a slower pace. That being said, it still faster than most laptops with dedicated graphics too.

Testing the laptop with Dota 2 and CS:GO, even on “High” settings, the laptop was capable of churning out a steady average of 68 FPS. If you tone down the graphics, it could even achieve more than 120 FPS.

Upgradability wise, the RAMs are soldered onto the motherboard, but you do get two M.2 PCIe x4 slots, one free.

Here are some of the synthetic benchmarks we ran on the Acer Swift 3X:

Battery wise, the Acer Swift 3X laptop can last me the entire day even on hardcore use. With casual use, it can last up to the second day. In our testing, the battery lasted for about 19 hours of web browsing, and almost 12 hours of 1080p video playback, which is impressive.

Charging the laptop back up to 100% from zero takes almost two hours, which is relatively fast with the 65Wh power brick.

The Acer Swift 3X is a great laptop that takes advantage of the full power of the Core i7-1165G7 processor and Iris Xe Max GPU. On top of that, it has great battery life with vast connectivity support on Wi-Fi 6, Thunderbolt 4, and dual M.2 PCIe x4 storage slots.

Priced at RM3,299, the Acer Swift 3X is catered to students, content creators, with more than enough power if you want to game during your downtime.

In this article:Acer, laptop, Review