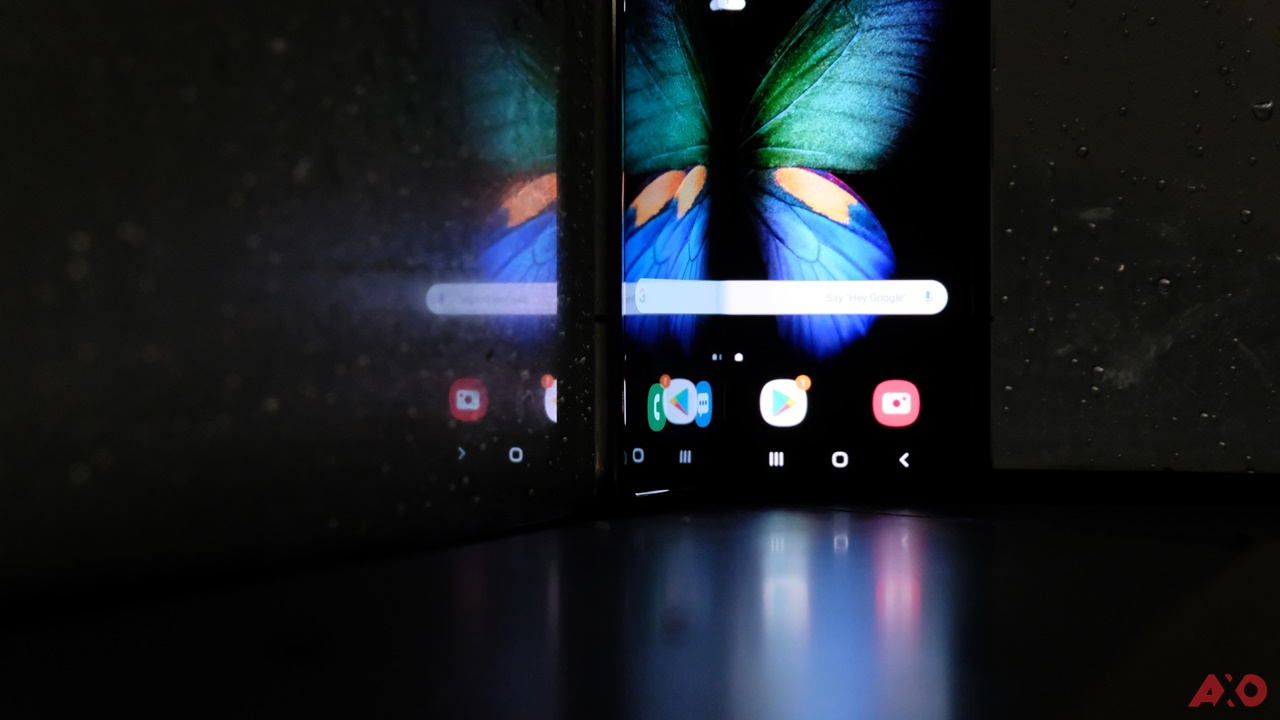 Samsung has finally released the updated Galaxy Fold that isn’t plagued by its breaking screen. Due to a screen protector issue, the original Galaxy Fold’s screen would break when the factory-applied screen protector was removed by the user. However, Samsung has apparently fixed that and here we are. This is AXO’s first impressions of the Samsung Galaxy Fold.

Holding the Galaxy Fold in my hands for the first time, it felt really good. There’s a very proper and firm grip when it’s unfolded. However, the same can’t be said for when it’s unfolded. Because it’s thinner when unfolded, you lose a lot of surface area to hold on to, so it can get pretty slippery.

Some may argue that the Galaxy Fold is rather heavy, but i think the heft is a good thing. It gives the phone a very premium experience. When you’re taking a call with the phone folded, it feels like a retro phone cause of its size, and to me that’s a good thing. The phone is easy to be unfolded with one hand, if you know how. But if you’re holding a Galaxy Fold in a crowd, it’s cooler to unfold it with two hands, even cooler to fold it with a satisfying “click”.

Button and port placement are well placed. You could charge the phone while you’re gaming or watching a video without the USB cable bothering your hands. On the screen itself, navigation buttons are placed on the right because most people would be right handed, right? (no pun intended) But i feel there should be an option to move the navigation buttons to the left for those who are left handed.

When folded, the front display of the Galaxy Fold is clear and it’s obvious that quite a lot of pixels have been crammed into such a small screen (by today’s standards). That being said, I personally didn’t like that the bezels on the top and bottom were so thick. That’s a lot of display space wasted, as I would have preferred a longer screen on the front.

When the phone is unfolded, this is where the magic happens. The display looks amazing. It’s bright, clear, and details are crisp, even the blacks are very nicely reproduced. Despite saying that, looking down the middle of the display where it folds, there’s a subtle crease line. When you’re on a more white screen, you don’t really see it. But if you’re watching a video or gaming that has a lot of black in the visuals, the crease line reflects on light and would show itself quite obvious.

On another note, I feel Samsung could’ve moved the removed the selfie camera altogether. That way, when unfolded users would get a full screen on the inside. As for selfies, the rear camera can capture the image while the front screen could act as the viewfinder. But hey, maybe in the Galaxy Fold 2?

Where performance is concerned, the phone really takes off. There’s no doubt operation on this phone is smooth and feels absolutely zippy. Samsung’s One UI feels intuitive and considerate, I say so because swiping up on the homescreen brings up the app drawer, and swiping up/down in the camera app would switch to the selfie lens.

Certain apps even let you choose where you want the layouts to face. For example, something as simple as the Phone app, it lets you choose to have the dialer in the center, left or right depending on how you use your phone and where your dominant hand is. Then swiping left from the edge of the screen brings up app shortcuts. Considering how big the phone is, navigation is best to be made simple and fast.

The sound on the Galaxy Fold is amazing, but only when you’re not covering them. You see, when you hold the phone unfolded in your hands, your palm would most likely be covering the speaker grill. That gives you muffled sound almost all the time. It takes a bit of readjusting the way you hold the phone to get the full and rich sound the Galaxy Fold is capable of producing.

You could remedy the issue by flipping the phone upside down, but then you’d have the selfie camera intruding on your screen space. This is a problem when it comes to gaming as well, but maybe you could just switch to the Galaxy Buds that comes with the phone.

Due to the short amount of time I’ve had with the phone, I couldn’t test out the camera to its full potential. But I must say, photography on the Samsung Galaxy Fold is phenomenally satisfying because of how big the screen is. The camera performs well in broad daylight but suffers from quite a bit of noise and blurriness in lowlight situations. I love that there are many modes and features to utilise in the camera app. It gives you a lot more room for expressing creativity. When it comes to video, performance is really good, thanks to the addition of Optical Image Stabilisation (OIS) on it. Videos turn out crisp, clear, and most importantly, stable.

Unfold the Galaxy Fold and get ready to immerse yourself in the world of gaming thanks to the large 7.3-inch Infinity Flex Display‎. It’s so big that you actually feel like you’re closer to the game. Each game you play, the game just comes alive.

Thanks to the Qualcomm Snapdragon 855 CPU and the Adreno 640 GPU, games are fast and clear with no screen tearing at all. Rest assured, gaming performance on the Galaxy Fold is nothing you have to worry about.

To sum it all up, the Samsung Galaxy Fold is a smartphone that’s capable of transforming into a tablet. It is a convertible when unfolded, everything you see and do on the screen just feels so much more satisfying. However, when it’s folded, you kind of get less than half of that experience.

Doesn’t matter if you’re just scrolling Facebook or Instagram, checking out Twitter, or watching Netflix, these will all be a guilty pleasure to do on the Galaxy Fold. It’s a true novelty to unfold the phone in front of others, a great attention catcher. But put that aside, it’s still a great smartphone. Sure the screen has a subtle crease line, but the display is still amazing to look at nonetheless. The Galaxy Fold goes beyond a phablet, it’s a device for those who want a smartphone but can still turn it into a tablet whenever they want. Fold for a smartphone, unfold for unlimited possibilities.