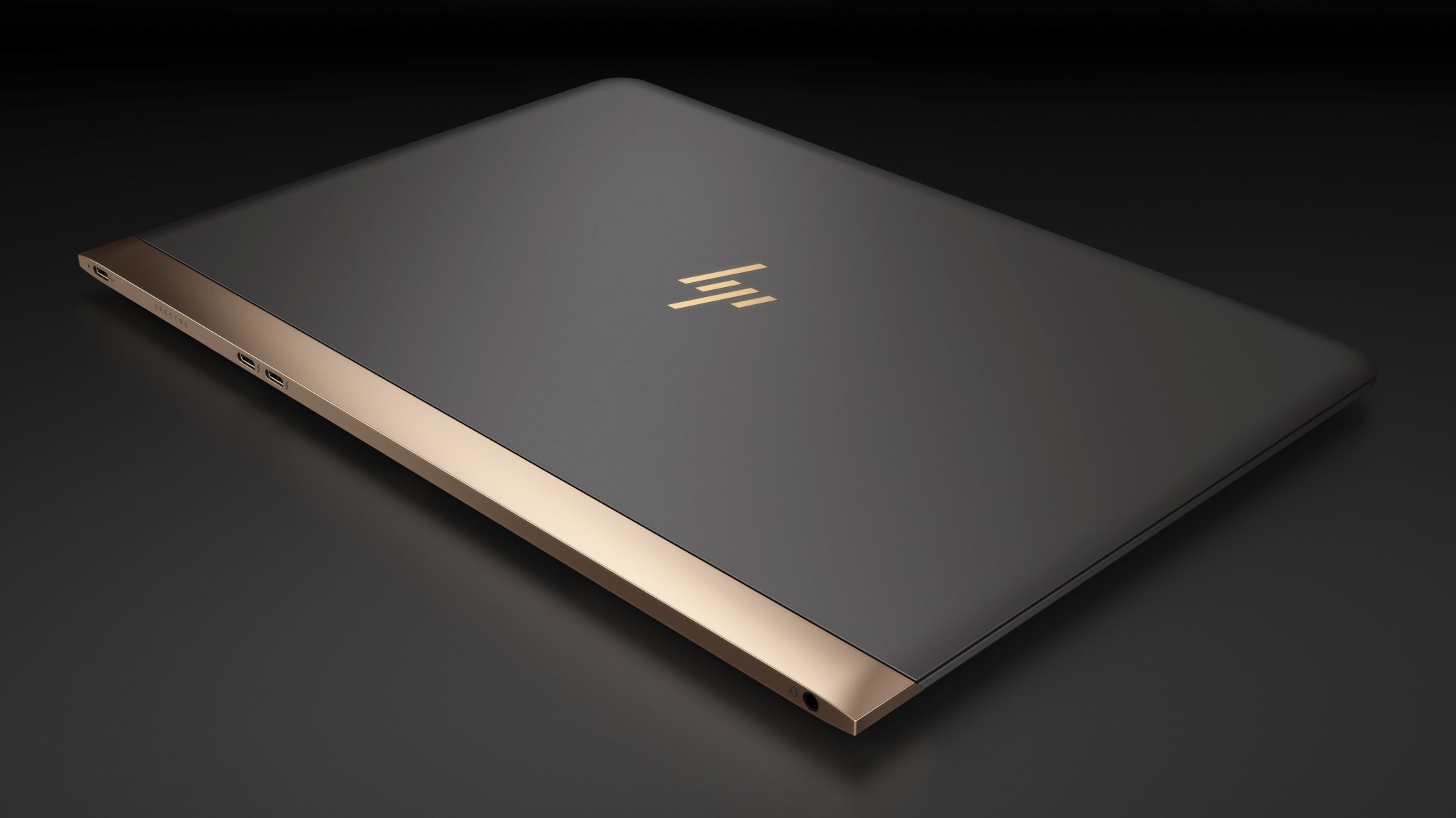 The Spectre lineup has always been HP’s premium offering of productivity laptops. When the company announced the Spectre 13, I was really excited as it only measured 10.4mm thick and weighs a mere 1.1kg, now making it the world’s second thinnest laptop.

Pretty similar to the HP Envy 13, the Spectre 13 is just a class above with a more premium design, complete with the company’s new HP logo covered in gold. The company sent us a unit and I was offered the chance to review it. How could I say no? Then I asked myself, would I spend RM6,900 for the HP Spectre 13?


First off, I have to say, the engineers and designers who worked on the HP Spectre 13 did a spectacular job with the laptop. The Spectre 13 had the right combination of materials used, matching colours, and top notch hardware to go with it.


Once you have the Spectre 13 in your hands, what you’re feeling is the combination of carbon fiber and aluminium, materials which are already light, thin, and durable to begin with. Carbon fiber makes the laptop lighter and it gives the laptop a nice touch to it, literally. The aluminium also helps with the laptop’s dissipation of heat. Opening up the laptop, immediately you’ll notice the unique golden hinges that make the display look like it’s floating in mid-air. The hinge feels firm and provides nice feedback, which makes it not at all flimsy.


The HP Spectre 13’s screen is a 13.3-inch full HD IPS screen protected with Corning Gorilla Glass. What I like about it is that the display’s surface isn’t too glossy. However, I would have preferred it if the display had a full matte surface, just saying.


The keyboard on the Spectre 13 is not only backlit, the etchings are also draped in gold, further complimenting the overall design of the laptop. The trackpad is made of glass, but having said that, its surface isn’t reflective at all. On the contrary, it’s matte, which goes really well with the laptop’s palm rest area. The upward-firing speakers on the HP Spectre 13 are built and tuned by Bang and Olufsen audio, but they don’t sound as good. We’ll get to that later.

I’m thinking HP moved all the ports on the Spectre 13 to the back of the laptop to allow for the thin design of the laptop. There’s one USB Type C port with charging capabilities on the right side, two more in the middle of the laptop, while the 3.5mm audio jack can be found on the left end of the Spectre 13.

I’m glad HP didn’t go too far with the Spectre 13’s design. The laptop had the same conventional body of a laptop, but elevated by a touch of refined elegance and finesse.


I’ll be honest, I was eagerly waiting for the delivery guy to bring me the HP Spectre 13. Because I wasn’t at the launch event to see and hold the laptop, I couldn’t wait to hold and unbox the HP Spectre 13 myself.


Opening up the laptop was a bit of a hassle as the bottom lid of the laptop had magnets that were so good that it was hard to open the laptop with one hand. Even if you were using both hands, it’s still pretty hard to open because there’s nowhere else to hold. Maybe it’s because the cavity on the front lid isn’t deep enough. Turning it on, boot up took 5 seconds flat, thanks to the speedy 256GB PCIe NVMe M.2 SSD.


Apart from the hinge, what caught my attention were the speakers accentuated with a unique looking grill and the audio tuned by Bang and Olufsen. When I tried playing music and movies on it, I felt that the speakers had the right amount of treble but lacks bass, which makes for lack of definition, thus making the audio sound tinny. That being said, HP made a good choice to place the speakers in an upward-firing direction compared to the usual downward-firing speakers on the bottom of laptops.


Speaking of movies, the display on the HP Spectre 13 is bright, crisp and the colours are pretty accurate with black blacks. However, the surface can be a little glossy at times, especially if you’re in a place with a lot of light coming in.

Being a productivity machine, the typing and navigating experience plays a huge role in whether the laptop is successful or not. I, for one, loved the keyboard and trackpad of the MacBook Air 13 (2014) and it will always be number one for me. But I will say this here, the keyboard and glass trackpad on the HP Spectre 13 comes in at a very close second place. Keys are well isolated, there’s good travel, decent feedback, and the trackpad is superbly smooth. My only wish is that the trackpad was bigger.


When it comes to ports, this is where I have the biggest gripe with the HP Spectre 13. I will go ahead and say that it’s good that companies are fully embracing the USB Type-C transition. But because we’re not fully there yet, I had a hard time connecting all my peripherals. At home, my laptop is my desktop. I connect my laptop to a monitor, mechanical keyboard, a mouse, and a cooler.

However, because my peripherals are all still using the normal USB, I find myself constantly plugging in the adapter connected to a USB hub. HP did build in a total of three USB Type-C ports but it should have left one USB Type A port, just in case. The company does realise this and it was nice of them to bundle a USB Type C to USB Type A adapter, as well as a USB Type C to HDMI adapter.


Not to mention that the premium look of the laptop gets diminished with an adapter and multiple cables jutting out of the laptop’s rear end. At the end of the day, I found myself connecting everything via Bluetooth.


After long hours of usage or if you’re doing some tasking operations like video editing, the fan can get pretty loud. The back part of the laptop can also be quite heated, but still tolerable. Lapability of the HP Spectre 13 is okay, but only if you’re using it for a short period of time.


It’s also a shame that the gold bar on the rear of the laptop appeared to have stains after using it for a few weeks. I think it got anodised and there were these strange marks that just couldn’t be wiped off.


The HP Spectre 13 that we got was powered by a 6th gen i7-6500 processor coupled with 8GB of RAM. If that doesn’t scream performance, then I’m not sure what does. The laptop is definitely capable of everyday usage, along with some light gaming.


At work, the HP Spectre 13 made surfing the web and scheduling social media posts look like a walk in the park. Performance is smooth with no lags whatsoever. The 256GB SSD onboard also helped with the fast launching of applications. Chrome, Photoscape, and Microsoft Office apps all loaded up really quickly on the Spectre 13.


At home, media consumption (especially video) is greatly enhanced with the superb display but I can’t say the same about its audio quality. The HP Spectre 13 is definitely loud and filled with just the right amount of treble, but it lacks bass. There’s no crackling sound or anything, but it would be nice to have bass when listening to music with the speakers.

When it comes to gaming, there certainly has to be compromise as it’s not intended for gaming in the first place. But that doesn’t mean you can’t game with it. It has no problems with less graphics-demanding games like Hearthstone, but when it comes to Dota 2 or Counter-Strike: Global Offensive, you will need to lower down the graphics settings to ‘medium’ or ‘low’.


Seeing that the HP Spectre 13 is marketed as a productivity laptop, battery life is the most important category the laptop has to excel in. Using it at work, I could get about five hours of battery life. It could get me through a work day, but I had to charge it when I get home.


Bringing the HP Spectre 13 out to events, its five hour battery life could definitely last the day even if i had several events lined up. When it comes to charging, the laptop charges via the USB Type-C port on the rear right side of the laptop instead of some conventional AC plug adapter, which is good.


If I’m heavily consuming media, like with a full HD movie with the volume turned up at 80%, I could watch one and a half movies before getting the Windows’ “Your battery is running low” message. Overall, battery life on the HP Spectre 13 is not like the nine hours as promised, but is still decent for a productivity laptop. (You’re not going to be productive 24/7 anyway, right? LOL)

The HP Spectre 13 is just one of the many productivity laptops that are available in the market. Let’s take a look at some of its worthy opponents.

For the same price of RM6,899, you could get the new Dell XPS 13 that comes with a 7th gen i7 processor instead of a 6th generation one. They both have the same amount of RAM and SSD storage, but the XPS 13 has a higher resolution QHD+ (3200 x 1800) display. That being said, the HP Spectre 13 is way thinner and lighter compared to the Dell XPS 13. The addition of USB Type C and lack of other standard ports also makes the Spectre 13 a future proof sleek-looking laptop.


If you’re looking for a Mac alternative, try the 2016 MacBook Pro without the Touch Bar. It retails for RM6,299 with the same amount of RAM and SSD storage, but with a lower-end 6th gen Intel Core i5 processor. With the efficiency of macOS, the difference in performance will not be that visible despite the Spectre 13 and MacBook Pro 13 having different processors of different class. The MacBook Pro comes with two Thunderbolt ports, so yes, connecting peripherals will also require rather pricey adapters which you will need to purchase separately.


The HP Spectre 13 is an amazing laptop but it’s not a product I’d see myself using. Hardware wise, HP got everything right, including the design (sort of). It has the highest end processor, decent amount of RAM, and almost the right selection of ports. Having said that, it’s still just 2016. We have not fully transitioned into the world of USB Type-C yet, so this is a laptop future me would love, not present me. If HP has already made so many right decisions with the Spectre 13, I can only imagine what the next Spectre laptop is going to be like.